← back to other calendars ← select years ← lunar eclipses in 1998 year 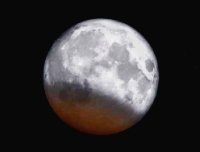 Half-shadow lunar eclipse. Around the cone of the earth's shadow there is a space where the Earth only partly obscures the Sun. In the event that the moon crosses the penumbra, but does not sink into the shadow, there is a half-shadow eclipse. At that moment, the luster of the Moon is slightly weakened. It is almost impossible to notice this with the naked eye. And only during the period when the Moon is approaching the cone of full shadow in the conditions of clear sky can one see a slight darkening from one edge of the Moon.