♇ Pluto in the 5 house of the natal chart 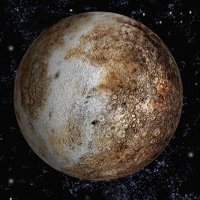 Such a person likes gambling and a lot and often runs the risk both in emotional and financial plans. Thanks to his innate courage, he achieves much. Sex can become the main driving force in his life, but he may not be interested in eroticism at all and even take a vow of celibacy. It is difficult for such a person to achieve emotional balance, for this he needs to find some area for manifesting his creative potential. The defeat of the planet leads to despotism in relations with loved ones. His creative powers are inclined to show such a person in artistic activity and in intense love affair. Almost always his children inherit his talents. Often, inspiration comes from above. Love experiences update this person. Their children turn out to be strong-willed, talented and even brilliant. Such a person is inclined to command his beloved, or become his slave. Sexual excesses can lead to the danger of destruction. Unreasoned speculation can put such a person on the brink of suicide because of losses and losses. In relations with children, such people are usually strict, imperious and despotic. These are very sensual, passionate and adventurous people, easily passing the boundaries of what is permissible in their love affairs and often endowing children with hereditary diseases (especially when the planet is badly damaged!). Such people are prone to fornication and often have illegitimate children. Harmonious planet brings success on theatrical and opera stage, in theater and cinema, in the field of pedagogy and sports. Damage to the planet poses a threat to the health of children, dangerous birth or infertility is possible.