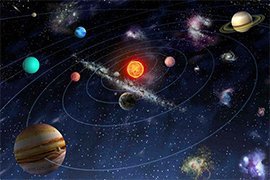 The movement of the planets and the most significant aspects in 2023 year. Mercury, Venus, Mars, Jupiter and Saturn in 2023 year - periods of retrograde, configuration, movement on the signs of the zodiac. This astrological service allows you to calculate the current position of the planets of the solar system. Planets are the most massive celestial bodies orbiting the star. From the Greek language, "planet" is translated as "wanderer", or "wandering". The planets of the solar system move in elliptical orbits around the Sun.

The connection between astrology and planets is very close. It can be argued that not only a certain planet has its own impact on man, but all the components of one component. Our actions and habits - this is the direct impact of planets, signs of the zodiac. Emotionality, character traits, karma and fateful decisions - it all depends on what planet we are born under.

The cusp of each house has its own specific ecliptic longitude, which changes the location in the signs of the zodiac as the daily sky changes: because the houses are attached to the sides of the world and as a result of the daily rotation of the Earth the signs pass through them. The cusp of 1 house is the Ascendant. The cusp of the 10th house is called Meridian. Cusps of houses are very important points of the horoscope. Cuspid is the place of energy concentration at home.