Aspects of the planets 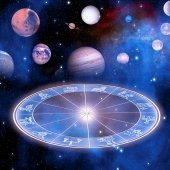 The planetary aspects are the geometric angles that are formed by the natal and transit planets. We all know such geometric concepts as a circle, a square and a triangle. We know how to draw and measure them. But we can not with the same ease understand the cosmic significance of these figures of geometry. The most complex ideas are based on simple truths. Simple geometric angles in astrology serve to describe a complex picture of circumstances, which, in turn, creates a pattern of human characters and relationships.

Aspects of planets are defined quite simply. Circle of the Zodiac - 360 °, divided into 12 parts, 30 ° each. Each sector symbolizes an astrological sign.

There are several aspects: opposition, trine, quadrature and sextile. Accordingly, they divide the circle into two, three, four and six parts. When the planets are located in the same degree of the same sign, a connection is observed.

Opposition
Opposition is observed when two planets are located at a distance of 180 ° from each other. The opposition symbolizes difficult circumstances, where the right solution is a compromise. Events related to the opposition are not subject to change or elimination, they must be accepted without trying to influence what is happening. At this aspect, the probability of loss or separation is great. Suppose, the opposition of transit Saturn and natal Mars. Mars - physical efforts of a particular person, transit Saturn - power and limitations. One possible difficulty for a person in whose horoscope such opposition is observed is a probable illness or fatigue. Perhaps also a manifestation of disobedience of power. Regardless of which planets are in opposition, such aspects are important moments in gaining invaluable experience, because they are accompanied by tangible difficulties.

Trin
Trin is an aspect in which planets are located at a distance of 120 ° from each other. It should not be forgotten that the signs of the Zodiac are divided into four groups according to the elements. Aries, Leo and Sagittarius are elements of fire, as a group they are a symbol of inspiration and action. Taurus, Virgo and Capricorn - the elements of the Earth, personify purposefulness and orderliness. Communication and information - the sphere of the elements of air: Gemini, Virgo and Aquarius. Signs of Water - Cancer, Scorpio and Pisces - symbolize experience and emotional manifestations.

Trin is considered the most successful aspect. Its driving forces provide a flow of energy. Trin is associated with harmonious circumstances, creativity, generosity and inspiration. But the trine also has some drawbacks for human nature: it lacks difficulties and obstacles. Light success and material wealth, as a rule, do not cause the need to strive for them. What is easy to get is easily lost.

Fixed signs, symbolizing patience and conservatism, are Scorpio and Aquarius. Gemini, Virgo, Sagittarius and Pisces are mutable signs, they assume flexibility and the ability to compromise. Between signs that have the same properties, there are natural quadratures.

Quadrature
The quadrature is observed when the two planets are located at a distance of 90 ° from each other. If trine generates a need to act, then quadrature is a symbol of the collapse of plans, a symbol of obstacles that require immediate reaction. Unlike the opposition, in which the difficulties are insurmountable, the difficulties of quadrature are completely solvable. It is only necessary to make certain efforts and perseverance, and even problems can be turned into advantages.

Sextile
Sextile is an aspect in which two planets are at a distance of 60 ° from each other. Sextile is in a sense like a trine: the circumstances associated with it are usually positive. But if trine is characterized by the fact that success and prosperity are taken for granted, then sextile is not a success, but only an opportunity to achieve it. When talking about the motive forces of sextile, opportunity is the key word.