← home ← articles on astrology ← characteristics of the signs of the zodiac 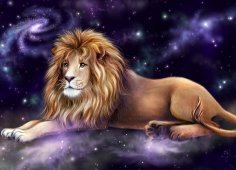 The Leo zodiac sign begins on July 21st, but for seven days it does not enter into its powers until the 28th of July. From this date onwards, the Leo is in full force until August 20th then within seven days gradually loses its power transferring its authority to the towering Virgo sign.

The sign of the fire of this zodiacal sign makes Lviv enthusiastic, energetic, and optimistic representatives of the zodiacal circle. A typical representative of this sign is a happy, stable and successful person. Lions do not like big changes, the status quo satisfies their majestic nature. They prefer to stick to their plans.

People born in this period always aspire to be exalted, they are attracted by strong personalities, as a rule, Lions are leaders. They will forgive any mistake in the people they love, while they have an individuality and purpose in life. Lions are usually generous, kind, sincere, with a huge spiritual enchantment, they find it hard to see bad in other people. If they attack, the Lions quickly strike back, but they also forgive easily and never hold a stone in their bosom.

The sun is the single most important planet, it represents the ego of the Lion and his individuality, it indicates their ambitions and the deepest traits of character.

Lions are usually successful financially, often get a chance in money matters, profit from an unexpected source. However, Lions crave true love of more than despicable metal, but this is one of those things that they rarely get. Lions are extremely independent, unable to tolerate control from other people, they are stubborn and go to their goals at high speed.

Such people have power over others, can inspire others, have the ability, like a locomotive, to lead them through fire and water. Lions often believe that they have nothing to lose in this world.

As a rule, people born in this period feel isolated and alone in life, and if they do not actively devote themselves to work or achieve a certain goal, they become sad and depressed.

It's not always easy to be friends with these people. They are best friends in friendship, until their ego comes to the fore and they do not abuse the relationship. Lions tie the longest friendship with people born in their own period or from March 21 to April 19-27, and, strangely enough, all those people who were born on the 1st, 10th, 19th, or The 28th day of any month, due to the fact that these numbers provide a certain correspondence to the number of the Sun, which is the ruling planet of this period.

These people tend to suffer from the heart, headaches and ears. At a more mature age, problems with overweight are possible, due to abuse of food.

Their most suitable colors are all shades of yellow, orange and pale green.

Birthstones during this period are topaz, amber, and rubies.