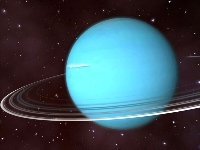 In your life, a frequent temptation to freedom will be repeated (especially in love), which will lead you to a new view of morality. This is a generation of romantic lovers who do not seek to bind themselves by marriage. The incentive to freedom for you is a free love. Sometimes you need freedom from society, in this environment formed hippies. At best, you develop talents of a creative nature in children, you are the bearers of advanced ideas in your creative work, you show a free initiative in art. You can be a leader and strive for the original leadership. In you are strong enough proprietary feelings, you need a lot of attention for your personality. The best people with Uranus in Cancer and in Leo - exceptional people, bearers of the ideological program of the generation - will manifest themselves at the end of this century.

In the worst case, you are threatened by selfishness, the danger of self-esteem developing into complexes, extravagance, obstinacy, inability to compromise and cooperate, which for yourself you will interpret as a desire for the desired freedom. Like people with Uranus in Aries, you are very quick-tempered and impulsive. You do not part with children's habits, you can play the game until old age and you can play, and with bad Uranus - lose. Without being bound by the conventions of traditional morality, you can disregard parental duties: for example, "cuckoo" throwing their children can justify this by the desire for freedom. Sometimes you project your vanity and your complexes on children.

You need to learn less to take care of yourself, and more - about others. You may be at risk from fire and outbreaks, as well as over-consumption of cardiac energy (a generation of early infarction).

The optimal field of activity for you - fine art, science, music, theater.

Here Uranus is in the house of Mars and Pluto, the sign of the exaltation of the Sun, in the sign of the element of Fire. For Uranus, this is a strong position. In this position, Uranus.. go →

Here Uranus is in the fall, in the house of Venus and Chiron, in the sign of the elements of the Earth and the exaltation of the Moon. Therefore, a contradiction arises: Uranus causes.. go →

Here Uranus is in exile, in the monastery of the Moon, in the sign of exaltation of Jupiter, in the sign of the elements Water. You usually perceive everything new through subconscious.. go →

Here Uranus is in exile, in the monastery of the Sun, in the sign of exaltation of Pluto, in the sign of the elements of Fire. In your life, a frequent temptation to freedom will be.. go →

Here Uranus is in the house of Mercury and Proserpine, the exaltation of Mercury, in the antagonistic element of the Earth. It forms a generation of workers capable of original,.. go →

Here Uranus is in the abode of Venus and Chiron, in the house of Saturn's exaltation, in the sign of the related element Air. You understand the world harmony in a new way, new ideas in.. go →

Here Uranus is in exaltation, in the monastery of Mars and Pluto, in the sign of the element of Water. This is the strongest state where Uranus manifests its true essence. Uranus is a.. go →

Here Uranus is in his daytime abode, together with Saturn, in the exaltation house of Mars, in the sign of the elements Earth (in the house of the fall of Jupiter and Selena, the.. go →

Here Uranus is on a visit to Jupiter and Neptune, in the sign of the element of Water. Here you can search for a new faith, denial of old ideals and meanings. Your generation with.. go →