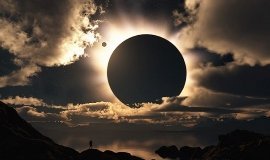 Before you, solar eclipses on 1987 year. To view the events of a certain day, go to the date. City New York.