Libration of the Moon

Libration of the Moon - small periodic wiggles for the terrestrial observer of the visible disk of the Moon near the common center. Because of the coincidence of two periods - the rotation of the moon around its axis and the revolution around the Earth - the Moon is constantly facing the Earth with the same (visible) hemisphere. Those. we can see from the Earth only 50% of the lunar surface.

The phenomenon of libration was discovered in 1635 by Galileo Galilei. Thanks to libration, we can see from the Earth 59% of the surface of the Moon. The thing is that around the Earth the Moon turns with a variable angular velocity: near the perigee (the nearest point to the Earth the Moon's orbit) moves faster, near the apogee (the most distant point of the Moon's orbit) - slower, while its rotation around its own axis is uniform. This allows you to see from the Earth the western and eastern edges of the reverse side of the moon - optical librations in longitude. 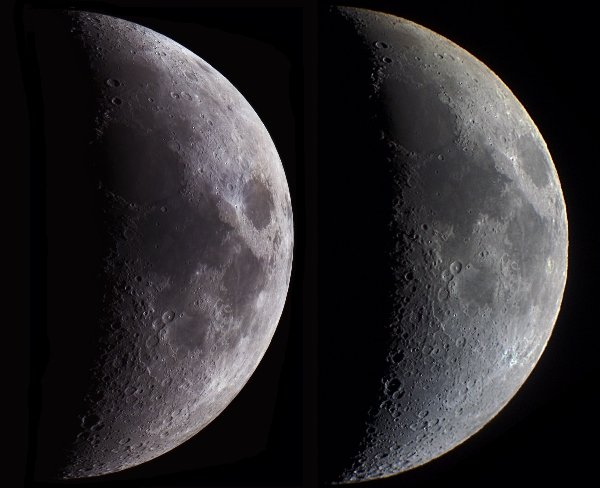 It reaches a maximum of ± 7º45'. In addition, due to the inclination of the axis of rotation of the Moon to the plane of the earth's orbit from the Earth, one can see the northern and southern edges of the opposite side of the Moon (optical latitude in latitude). Libration in latitude at a maximum reaches ± 6º41 '.

Additional libration effects are due to the diurnal rotation of the Earth, when the position of the observer relative to the Moon changes by the magnitude of the Earth's diameter (daily libration, reaching up to 1º). It is associated with the small distance of the Moon from the Earth and with the parallax that occurs when the Earth rotates. As a result of the observer's movement, along with the Earth's surface, with its daily rotation, the western regions of the Moon, then the eastern regions, become accessible first for observation. The period of daily libration, of course, is one day. Due to the uneven gravitational attraction of the Earth, there is a physical libration, reaching up to 2 '. This is a "rocking" of the Moon, which is caused by tidal forces from the Earth and manifests itself in a slight change in the period of the Moon's rotation around its axis. Physical libration occurs according to a complex law.