The moon - the reverse side: riddles and secrets 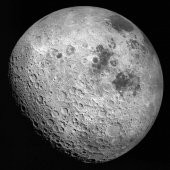 The hills and hills on the other side of the moon can be the "remains" of the second small satellite of the Earth, which appeared simultaneously with the Moon and after several tens of millions of years crashed into it, say the authors of the article published in the journal Nature. The opposite side of the Moon, unlike the relatively plain visible side, is covered with numerous hills and craters. Such asymmetry of the Earth's satellite was tried, in particular, to explain the uneven cooling and congelation of the "newborn" Moon, the impact of the Earth's gravity or the increased "bombardment" of the reverse side.

Martin Jutzi from the University of Bern in Switzerland and his colleague Erik Asphaug from the University of California at Santa Cruz, USA, proposed a new explanation for this feature of the reverse side of the moon - in their assumption, its relief may be " remains "of the second Earth satellite, which appeared simultaneously with the Moon and crashed into it after several tens of millions of years.

It is believed that the Earth and the Moon arose as a result of a collision of the "embryo" of the Earth and a small protoplanetary body the size of Mars, whose heavy core "drowned" in the molten magma of the Earth, and light matter "splashed out" and formed the Moon.

Yutzi and Asphghogh believe that not two bodies could be formed on impact - the Moon and the Earth, but three or even more. In this case, large "additional" bodies could exist for a sufficiently long time, turning around the Earth in "Trojan points" - points in the Moon's orbit, where the attraction of the Earth and its satellite counterbalances each other. Such "mini-moons" were supposed to cool faster than their big "sister" and hardly contained a large number of heavy elements, which are relatively large in the samples of the lunar soil from the visible side of the earth satellite. 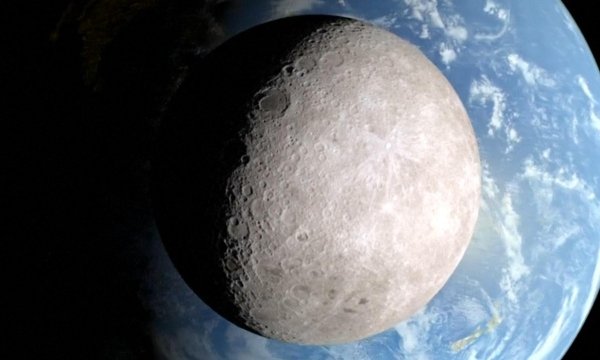 Such a "mini-moon" with a diameter of a third of the lunar, according to the authors of the article, would collide with the Moon at a low speed, and its fragments would "stick" on the scorching surface of the "sister". In this case, harder and lighter rocks would "shift" the Moon's magma to its visible side, which corresponds to the observations of the Lunar Prospector probe, notes Maria Zuber of the Massachusetts Institute of Technology (MIT) in her commentary on the article.

Researchers believe that their conclusions can be verified in practice if mankind manages to collect and deliver to Earth samples of lunar soil from the back of the celestial body. A comparison of the soil with the visible and reverse sides will show how different the age of the rocks is, if the hypothesis of Yutzi and Asphah is true, then the rocks of the reverse side will be much older than the soil of the visible side.

In addition, the probes of the new moon mission of NASA GRAIL (Gravity Recovery and Interior Laboratory) will help to check the hypothesis of scientists. The mission of GRAIL is to launch two identical probes into parallel orbits around the Moon at an altitude of about 55 kilometers. Measuring the distance between the devices, which will change as they pass through the lunar gravity anomalies, scientists will build a gravitational map of the satellite and get an idea of ​​the inner structure of the moon.

It can again remind us of some partial disclosure of the mystery that our "natural" companion contains.