The moon is the celestial body closest to Earth: the average distance to it is about 384,400 km. As the planets of the solar system revolve around the Sun, so does the Moon rotate around the Earth in an elliptical orbit. On some sections of its path it closest to our planet (356,400 km); this point of its orbit is called perigee (Greek peri - "near", "about" and ge - "Earth"). On the other hand, on the other hand, the distance from the Earth to the Moon becomes the maximum, amounting to approximately 406 800 km, and this part of the orbit is called the apogee (literally "far from the Earth").

The maximum distance from the Earth (apogee) is 406,800 km.
The minimum distance from the Earth (perigee) is 356,400 km.
The diameter along the equator is 3,476 km.
Average temperature on the surface (day side) 130º С.
Average surface temperature (night side) -180º С.
The period of revolution around the Earth is 27.3 Earth days.
The period of revolution around the axis is 29.5 Earth days. 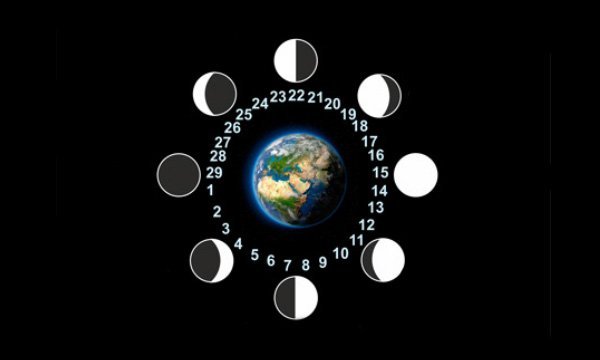 In the orbital cycle, which takes less time than the earthly month, lies the secret of the Moon's change in its appearance and position in the sky. Everyone knows that on other nights it is completely invisible, while in others it can represent a different size of a sickle or a full disk. These states, called the phases of the Moon, are due to the reversal of the latter around the Earth: we see different parts of the lunar surface, illuminated by the Sun. For example, if the moon is in the southern part of the celestial sphere, then the right half of the satellite of our planet (the so-called first quarter) will be illuminated. If the Moon is closer to the Sun, that is, in the western part of the sky, then the area of ​​its surface reflecting the sun's rays will be sharply reduced and only a narrow crescent will be visible.

How does the new moon come

At the time when the Moon passes between the Sun and the Earth (this phase is called a new moon), its illuminated surface turns completely towards the star and for the earthly observer this celestial body becomes completely invisible.

How the Full Moon Comes

And vice versa - the more the Moon approaches the eastern part of the sky, the greater part becomes visible; at some point the entire side of the planet turned towards us turns out to be illuminated by the Sun - the full moon comes.

During a new moon or full moon, when the Earth, the Sun and the Moon are on the same line, eclipses can occur.

Moon eclipse. When the Earth is between the Sun and the Moon, the shadow from the latter falls on the Moon, resulting in a lunar eclipse.

Solar eclipse. If the Moon passes between the Sun and the Earth, then a solar eclipse sets in.

Mutual attraction of the Earth and the Moon

Celestial bodies circling around the more massive neighbors - just as the Moon revolves around our planet - are called satellites. The moon, unlike the natural satellites of other planets of the solar system, is unusually large relative to the Earth: its diameter is 3,476 km.

Some scientists even tend to consider the Earth and the Moon not so much a planet and its companion as a double planetary system. Due to the fact that such massive bodies are in close proximity to each other, their mutual influence is very great. The moon has a noticeable effect on the terrestrial oceans, causing ebbs and tides, and the Earth's gravity leads to moonquakes - similar to earthquakes, but less severe and not so frequent fluctuations in the surface of the Moon.

According to the structure of their bowels, the Earth and the Moon are very similar. Both the first and the second have a massive, iron-rich core, surrounded by a mantle, and the bark is a fairly thin layer of hard rocks. The difference is that the lunar crust, unlike the terrestrial crust, is not divided into tectonic plates drifting along the mantle located beneath them. Apparently, the Moon also does not have a liquid shell of the nucleus, in which motions occur, leading to self-excitation of the magnetic field - it does not exist in the satellite of the Earth.

There are several theories on this score. The first, the so-called theory of separation, presupposes the loss of the Earth in the process of its formation (about 4.6 billion years ago) of a part that has become an independent celestial body.

According to another - the theory of accretion (Latin accretio - "increase") - the formation of the Moon and the Earth occurred simultaneously and from the same elements.

Another theory of capture is that the Moon, formed independently in another part of the solar system, was then attracted by the Earth.

However, the most interesting theory is the collision ejection: as it follows from it, the already formed and cooling Earth collided with enormous speed with a planet whose diameter was about 6,700 km; the red-hot fragments of both celestial bodies thrown into space and became the basis for the formation of the "night sun" familiar to us all.

The rotation of the Moon around its axis coincides with the inversion of this celestial body around the Earth in such a way that only one side of it always turns to us; this is called synchronous inversion or spin-orbit coupling. The side, constantly visible from the Earth, is called - visible, and the opposite - reverse.

If using an optical device to consider the lunar surface in the approximation, then a mass of details not visible to the naked eye will open on it. The first person in history to look at the moon in a telescope is the Italian astronomer Galileo Galilei (1564-1642) - he was astonished to see in 1609 on the surface of another celestial body vast plains, mountains and craters. Modern astronomers have much more sophisticated instruments for observation; In addition, Soviet and American spacecraft (later - other countries), having made more than one landing on the moon, brought to Earth samples of soil and rocks. And in 1969, for the first time there were people here (they were American astronauts Neil Armstrong and Edwin Aldrin, for more on this read in the article The first manned flight to the moon: how it was).

Studies have shown that most of the lunar surface is a plateau with a height of more than 5 km; basically they are concentrated on the reverse side of the Moon - as scientists consider, the crust of the planet is thicker there. And in the lunar seas, despite the name, there is not a drop of water: these huge valleys were formed, apparently, in the collisions of dense meteorite streams with the surface of the planet, when lava poured into the crust that formed in the crust and filled huge areas.

On the Moon, no signs of life have been found - and it is not surprising, because of the lack of an atmosphere, the surface of the Moon constantly experiences huge temperature changes: on the day side 130ºC, and at night to -180ºC.