← home ← articles and news ← news about the moon and space

By 2026, NASA plans to send a mission to prevent the asteroid threat 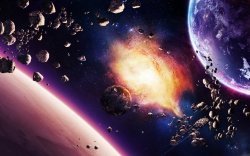 Especially for NASA, students from the Massachusetts Institute of Technology (MIT) have created a project, which is possible by 2026 to the Asteroid 2004 MN4 (Apophis) will go a new mission.

The asteroid Apophis is considered to be the most dangerous object in the near space, which threatens life on the Earth and the whole mankind as a whole. In diameter, this rather large asteroid reaches 320 meters, and its mass is about 20-40 million tons.

Since its discovery in late 2004, Apophis received the first category of danger according to the Turin scale. However, later, after some time, its relatively low level of the threat presented rose to the fourth level. This happened when astronomers calculated a noticeable change in the trajectory of its movement in 2029, because of which already in April 2036 it could lead to an inevitable collision with the Earth.

Since then, the representatives of NASA and Roskosmos have faced the task of developing plans to change the trajectory of his flight, otherwise human civilization will be destroyed by this "asteroid of the apocalypse".

This "Apophysomania" continued until the end of 2013, while NASA's telescopes did not receive radar images of the asteroid, thanks to which the probability of meeting with the Earth predicted for 2036 was not denied. It became clear that in the next couple of hundred years this is not expected.

MIT students of 20 people and two professors from the institute developed a detailed plan for the construction of the probe to be sent to the asteroid when it is as close as possible to our planet. The device will have to measure the exact values ​​of all the important physical characteristics of the asteroid, including its weight, shape, density and rotation speed.

With the help of this space probe, it will be possible to conduct a not simple scientific mission, such as the OSIRIS-REx project, which was sent to another of the dangerous asteroids - Bennu (1999 RQ36) last year. The spacecraft also includes elements of planetary protection to assess the level of asteroid hazard and to find ways to eliminate it. As Lindley Johnson, head of the planetary protection department at NASA, said, the agency is already interested in this project, which even now can be declared as a new asteroid mission.

In case the space agency supports the project developed at MIT, the launch of the probe should be made no later than 2026. Observance of this condition is necessary for the exit of the device to the trajectory of rapprochement with the asteroid, it must have time to "catch up" with it before the approach to the Earth for fixation in its orbit occurs.

Professor MIT - David Miller said that the uniqueness of the measurements of this spacecraft, which is temporarily called "Apophis", is that with their help, we will be able to assess the influence of the attraction of the Earth on the trajectory of the motion of asteroids alternating with approaching our planet . Only in this way can we assess the real threat from the asteroid, and find out whether Apophis represents the danger of destroying life on Earth in the distant future.