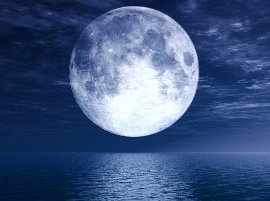 "Blue Moon" refers to the second full moon, occurring for one calendar month. The name is due not to a change in the color of the Moon, but to the idiomatic expression "Once in a Blue Moon", borrowed from the English language, which literally translates as "Once Upon a Blue Moon," and one of the values ​​is equivalent to the Russian expression "After the Rain on Thursday" (i.e., very rarely, or never). The full moon itself has an ordinary, ash-gray color; the appearance of a blue shade in the moon is an extremely rare phenomenon due to the optical effect. This event occurs once every 2 or 3 years.

In fact, the Blue Moon will indeed awaken in us immediate actions to change the course of life. Within four days you will probably be able to see new opportunities or, at least, think about what does not suit you. Perhaps, the solution you need is very unexpected and not at all, as you could imagine.

Sometimes the comfort zone can play a cruel joke. Until then, it can be convenient, but sooner or later it becomes exhausting and keeps from very important steps, does not let us know who we really are.

The Blue Moon contributes to the exit from the comfort zone and allows you to experience life with all its pluses and minuses. She opens her eyes to us. In order to really see new opportunities, we must trust the universe and swim along with the flow of its energies.

Open for opportunities that will appear in the Blue Moon period. Follow your heart and believe in your desires. Remember that this period gives you the opportunity to take the first step in the right direction, and then everything will depend on you.

Blue Moon for other years
Share this
Popular lunar calendars