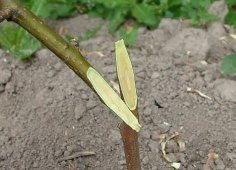 Copulation is the most popular and convenient option for thin rootstocks. A thin stock is something we are most often dealing with: young ducks who want to turn into high-quality trees; berry and ornamental shrubs; Grapes and young branches of the crown of fruit trees, the quality of which we want to improve.

Simultaneously, the advantage and complexity of copulating is that it is applied only in cases when both participants in the operation - the stock and the graft - have the same diameter. The stock can be a 1-2-year-old wild mare or the same age as a branch of a fruit tree with a diameter of less than 1.5 cm. The graft should be selected accordingly. 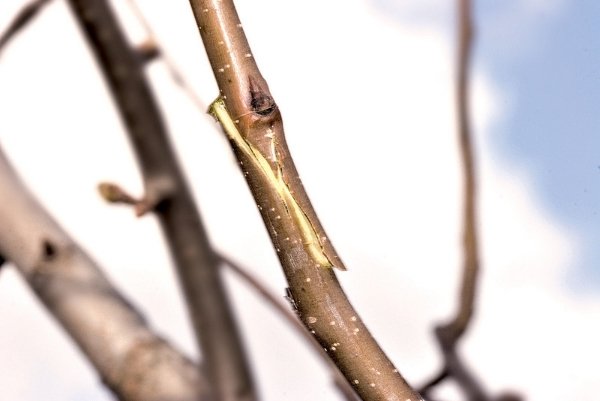 Advantages of the method

The name this method received from the Latin copulo, which translates as connect. The characteristic is absolutely accurate, because the whole essence of the method is reduced to a simple mix of the rootstock and the cuttings. In this simplicity is a big plus. For even a beginning gardener is quite capable of mastering the technique of such an inoculation and joining the cultivation of new varieties in his garden. In addition, with the help of copulating from a young wild bird, you can quickly get a fruit tree of the right kind. And the third great advantage of copulation is the high percentage of vaccination survival.

Copulation is carried out in the spring, before the buds are released into the rootstock. To the operation proceed, as soon as the temperature will allow to work in the open air. The first grafted stone fruit. It is known that the inoculation of cherries and cherries gives the best results, if done before the beginning of the sap flow.

The best time for this is the end of March and the beginning of April. Seedlings are inoculated from the beginning of April to the middle of June. The pledge of successful copulation is to perform the operation when the stock is "waking up", and the graft (varietal stalk) is still in a dormant state. This can be achieved if the cuttings were harvested at the end of autumn or at the end of winter or early spring, when the shoots were in a state of complete rest, and were in the cold before the vaccination. Gardeners successfully use two types of copulation - simple and improved.

It is really simple in technology. Its essence lies in the fact that the cuts are made to the same size and prievo, and these sections are tightly pressed against each other so that they join together at the point of contact. 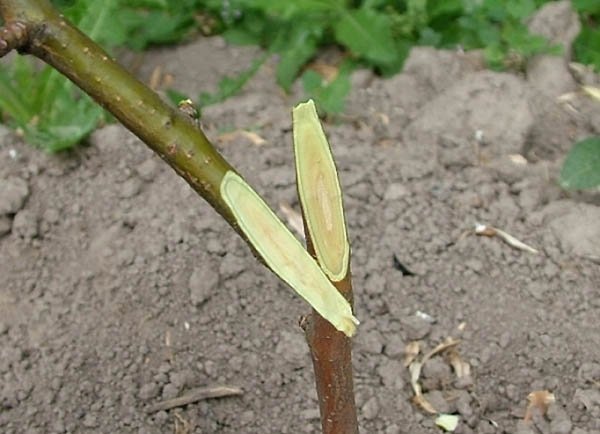 Even a cursory glance at the scheme is enough to understand the technology of simple copulation. But there are subtleties even in the simplest procedures. Let's focus on them step by step.

Step 1 : Preparation of the stock. On the stock (trunk or branch) you need to choose a smooth, without defects of the bark (and it would be good even without kidneys) place. Wash the root with a clean damp cloth. This is not a trifle - let's remember how easy it is to put the infection in an open wound, and we will just make such a wound. Using a sharp (copulating) knife, make an oblique smooth cut at an acute angle (about 20-25 °). This is to ensure that the area of ​​contact between the scion and rootstock is sufficiently large, so the cut length should be about 3-5 times larger than the diameter of the rootstock - 2.5-4 cm (depending on the thickness of the rootstock). The cut must be done in one movement (by yourself). Here you can not do without training, it is good for any summer resident.

Step 2 : Preparing the scion. On the cuttings make the same length of the cut, as in the stock. To do this, you first need to select on the cuttings those 2-3-4 kidneys that "will go to the inoculation." Begin a cut 1 cm below the first lower kidney and make it at the same angle as the rootstock ... Then, above the third kidney (or the second or fourth in your design) at a distance of about 2 mm, cut the cuttings at an angle of 45 ° to the kidney the figure shows that the cut goes toward the kidney and just above it). If you are already doing the procedure with confidence, it is more convenient to first select well-developed kidneys on the cuttings, trim them over the upper bud, and then cut the working cut after this.

Step 3 : Combine the graft and stock. Attach the graft to the rootstock with a cut so that a single shoot is obtained. If the slices are made correctly, then their surfaces almost completely coincide, and the cambial layers of the scion and rootstock tightly press against each other. And this is one of the most important conditions for proper fusion.

Step 4 : fix the place of vaccination. A narrow strip of polyethylene film (5-10 mm) or a special elastic band, it is necessary to tightly wrap the place of inoculation, tightly pressing the sections of the stock and bringing them to each other. Each turn of the tape is done with overlapping. Here is the "thin spot" of vaccination: during wrapping, it is important not to dislodge the cambium streaks. Often the question arises: whether to wrap the kidney, which is located just in the winding area? Gardeners do so, and so on. But in the old Soviet editions on gardening it is advised to leave the kidney open.

Step 5 : Protect the vaccine. The upper cut of the cut must be covered with a garden so that the upper bud does not dry out. Some gardeners for the first time put on the vaccine site a clean polyethylene or paper bag or special cap to reduce evaporation. There is one nuance that must be borne in mind: the upper cut of the cuttings will be wet, so the layer of the garden can just slip off (move) while you do the manipulation. This trifle can play a fatal role: the upper, and sometimes even the following, the kidney may not germinate because of drying. Therefore, it is better to be safe and check again. Now it remains to wait for the result. If done correctly, after 2 weeks, the kidneys should move to growth.

As you can see, the method of simple copulating is really simple. But he has one major drawback: it is very inconvenient to keep the shank on the stock before and during the strapping, so that the slices do not move. Perhaps that's why there was a need for improved copulation.

This method differs from simple copulking by the fact that on the slanting sections of the scion and rootstocks make tongue-cleavers, which form a kind of lock, allowing the priowi to stick tightly to the rootstock. 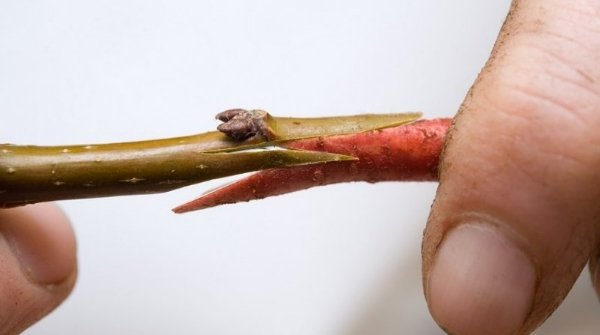 The technology of the first two steps is exactly the same as for simple copulation.

Step 1 : Preparation of the stock. Wash the root with a clean damp cloth and make an oblique smooth cut at an acute angle.

Step 2 : Preparing the scion. On the cuttings make the same length of the cut, as in the stock.

Step 3 : Cutting the tabs. Cut the rootstock mentally divided into 3 equal parts and, having retreated one third from the top, make a knife longitudinal cut along the shoot axis to a depth of about 10-12 mm. The same is done on the cut of the scion.

Step 4 : Combine the scion and rootstock. To get a graft to the basement with the tongue for the tongue so that they tightly hold each other with a tongue lock. If the diameters of the rootstock and the cuttings do not coincide a bit, the tongues allow you to move the scion so that at least one side of the cambial layer coincides with the stock.

Step 5 : fix the place of vaccination. Just as with simple copulation, with a polyethylene or special elastic band, it is necessary to tightly wrap the place of grafting, tightly pressing the sections of the stock and bringing them to each other. Each turn of the tape is also done with overlapping.

Step 6 : Protect the vaccine. The upper cut of the cut is covered with a garden or plasticine. Put a clean plastic bag on the fixed area, tying it lower than the vaccine.

Comparing the methods of simple and improved copulation, you inevitably come to the conclusion that two unpretentious incisions significantly simplify the procedure. In addition, these flat tongues greatly increase the area of ​​contact between the scion and the stock. So - and the chance of success is greater. Well, we also got to know two more ways of grafting fruit trees. You can begin to develop practical skills. And you need to start with the preparation of tools and materials.