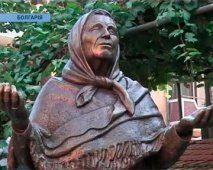 January 31, 1911, the great seer Vangeli Pandev Guterov was born, known to the people as Vanga , in the small village of Strumice, it was part of the Ottoman Empire, now the Republic of Macedonia, in a poor family. Her father was poor peasant - P. Dimitrov. The very name of Wangelia, means "good news."

When it was known about the beginning of the First World War, Vanga's father was mobilized in the ranks of the Bulgarian army and his mother was almost four years old. After the war, Vanga's father returned to Strumica and married a second time. After some time, the family had to move to their father's homeland in Novo selo, not far from the former village.

In 1923, when Wang was twelve years old, she had to face the most sad event, which changed her later life. Playing with the other guys in the pasture field, not far from the house, the clouds, the clouds, the wind, the wind, the wind, house and carried more than a hundred meters above land, soon tossing it to the ground. She lay unconscious, her eyes completely covered with sand. A passer-by in the village saw him accidentally, taking him in his arms.

Doctors examined the girl and brought out a verdict that she had made her parents worry even more, she needed a serious operation, money for which her parents could not find. Eventually, Vanga began to get blind and eventually her eyes left her. Closer to 1925, she was sent to the House of the Blind, in which she had to live until her majority. So Vanga was trained in reading, needlework, and cooking. In the same place. After a while, her father came to take her back home. her stepmother died.

Since then, Vanga 's life has become unbearable. Poverty made her work days and nights to survive. In 1930, she caught a severe cold, as a result of which she was diagnosed with poliomyelitis, in other words, paralysis of the spinal nerve. This disease did not leave her a chance to live, but the incredible happened, Vanga was recovered. With recovery, she had the ability to predict the future of people, she became a seer. Afraid that she might be declared insane, he kept his secret about clairvoyance. But she did not have to remain silent for long, in 1940 Vanga informed her friends about the upcoming terrible war, which she did not believe. And it was only when Germany invaded the territory of Yugoslavia with troops that Vanga was declared a people's seer.

Every day, many people started coming to her, asking for help. Boris III himself, who was a Bulgarian king, paid her a visit. In 1942, she married a soldier D. Guschev and they moved to Petrich. Twenty years later, her husband died of alcoholism, and she decided to be an orphan boy, who later became her own son. In 1967, she was officially registered as a civil servant. The money was paid for visiting. Vanga went to the state treasury.

The seer told everyone about her prophecies, which, strangely enough, came true: the Chernobyl Nuclear Power Plant, the terrorist attack in the USA on September 11, the end of the Second World War, and others.

On August 10, 1996, the heart of the great Vanga stopped. The reason for her departure from life was breast cancer. She also predicted the exact date of her departure and the stunning news for everyone about a certain girl who was born in France and has the ability to predict the future. According to Vanga, this girl will be a world-famous clairvoyant.