The Origin of the Moon 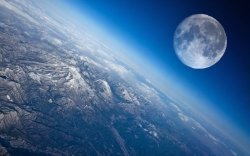 The moon is very large in size relative to the Earth. The diameter of the moon at the equator (in the middle) is 3,475 km, which is slightly less than a quarter of the Earth's diameter. Therefore, some astronomers even believe that the Earth-Moon system should be considered as a double planet. But let us return to the question of the origin of the moon.

In the early stages of the Earth's existence, she had a system of rings like the one that Saturn has. Perhaps the moon formed from them?

When the Earth was still very young and consisted of molten rocks, it rotated so quickly that because of this it stretched out, took the shape of a pear, and then the upper part of this "pear" broke away and turned into the Moon. This hypothesis is jokingly called "subsidiary".

Hypothesis of the third (collision)

When the Earth was young, she was subjected to the impact of some heavenly body, the size of which was half the size of the Earth itself. As a result of this collision, a huge amount of matter was thrown out into outer space, and later the Moon formed from it.

The Earth and the Moon were formed independently, in different parts of the solar system. When the Moon passed close to the earth's orbit, it was captured by the gravitational field of the Earth and became its companion. This hypothesis is jokingly called "conjugal".

The Earth and the Moon were formed simultaneously, in close proximity to each other (in jest - "sister" hypothesis).

Several small moons were captured by the Earth's gravity, then they collided with each other, collapsed, and the present Moon formed from their debris.

From the molten proto-earth, significant masses of matter were evaporated into space, which then cooled down, condensed in orbit, and formed a protolun.

Each of these hypotheses has its own pros and cons. At present, the collision hypothesis is considered the most basic and more acceptable. Let's consider it in more detail. 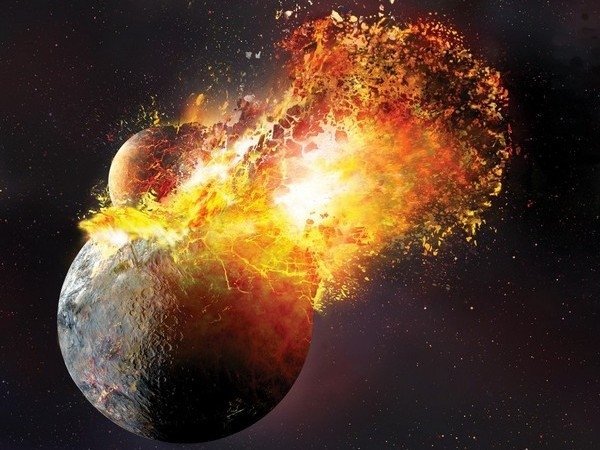 This hypothesis was proposed by William Hartman and Donald Davis in 1975. According to their assumption, a protoplanet (it was called Teia) about the size from Mars collided with proto-Earth at an early stage of its formation, when the Earth had about 90% of the current mass. The impact did not come in the center, but at an angle, almost tangent. As a result, most of the substance of the impacted object and part of the matter of the Earth's mantle were thrown into a near-earth orbit. From these fragments proto-Luna gathered and began to go in orbit with a radius of about 60 000 km. The earth as a result of the impact received a sharp increase in the rotation speed (one revolution in 5 hours) and a noticeable inclination of the axis of rotation.

Why is this hypothesis about the origin of the moon considered to be the main one? She explains well all the known facts about the chemical composition and structure of the Moon, as well as the physical parameters of the Moon-Earth system. Initially, great doubts caused the possibility of such a successful collision (oblique impact, low relative velocity) of such a large body with the Earth. But then it was suggested that Teiya formed in the Earth's orbit. Such a scenario explains well the low collision velocity, the angle of impact, and the present almost exactly circular orbit of the Earth.

But this hypothesis also has its own vulnerabilities, as, however, every hypothesis (after all, HYPOTHESIS in Greek means "assumption").

So, the vulnerability of this hypothesis is as follows: the Moon has a very small iron-nickel core - it is only 2-3% of the total mass of the satellite. And the metal core of the Earth is about 30% of the planet's mass. To explain the iron deficiency on the moon, it is necessary to assume that at the time of the collision (4.5 billion years ago) both on Earth and Teia, a heavy iron core was already separated and a light silicate mantle was formed. But unequivocal geological confirmations to this assumption have not been found.

And second: if the Moon somehow found itself in the Earth's orbit in such a long time and after that did not undergo significant shocks, then on its surface, according to calculations, a multimeter layer of dust settling from outer space would have accumulated, which was not confirmed by the landing of space apparatus on the lunar surface.

Until the 1960s, the main hypotheses of the origin of the moon were three: centrifugal separation, seizure and joint education. One of the main goals of the American lunar expeditions of the 1960s-1970s was to find evidence of one of these hypotheses. The first data obtained revealed serious contradictions with all three hypotheses. But during the flights of the Apollo, there was still no hypothesis of a giant collision. It is she who is now dominant.