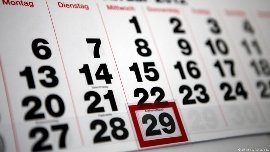 A year is a conventional unit of time, which historically means a single cycle of seasons (spring, summer, autumn, winter). In most countries, the calendar duration of the year is 365 or 366 days. Currently, the year is also used as a temporary characteristic of the circulation of planets around stars in planetary systems, in particular, the Earth around the Sun.

In any leap year, the number of days is longer than usual, because In February another additional day is added - on February 29. Therefore it is necessary to know the number of additional days spent in leap years. It is easy to calculate, using the leap table in the XIX and XXI centuries. Leap years come after three non-leap years and are always only even. Every second even year of the Gregorian calendar is a leap year.