Eastern horoscope by year of birth 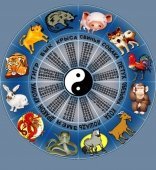 There are several legends that shed light on the appearance of the eastern horoscope. The most common one says that 12 animals, whose names are called periods of time, is a motley company that appeared at the call of the Buddha, saying goodbye to earthly life. According to the second version, the animals were summoned by a rat that carried out the imperial order, and in the third variant the animals had to compete in running and swimming.

Whatever it was, it is these 12 mythological animals that personify the cosmic influences that manifest themselves in the year of the birth of people and affect their entire future life. This system divides the course of time into 60-year cycles, in which 12 animals and 5 elements alternate.

Unlike the western horoscope, where each of the 12 signs corresponds to one month, in the eastern horoscope every "sign-beast" reigns for a whole year. The account is maintained according to the lunar calendar, and the beginning of the year falls on the second full moon after the winter solstice (ie after December 22).